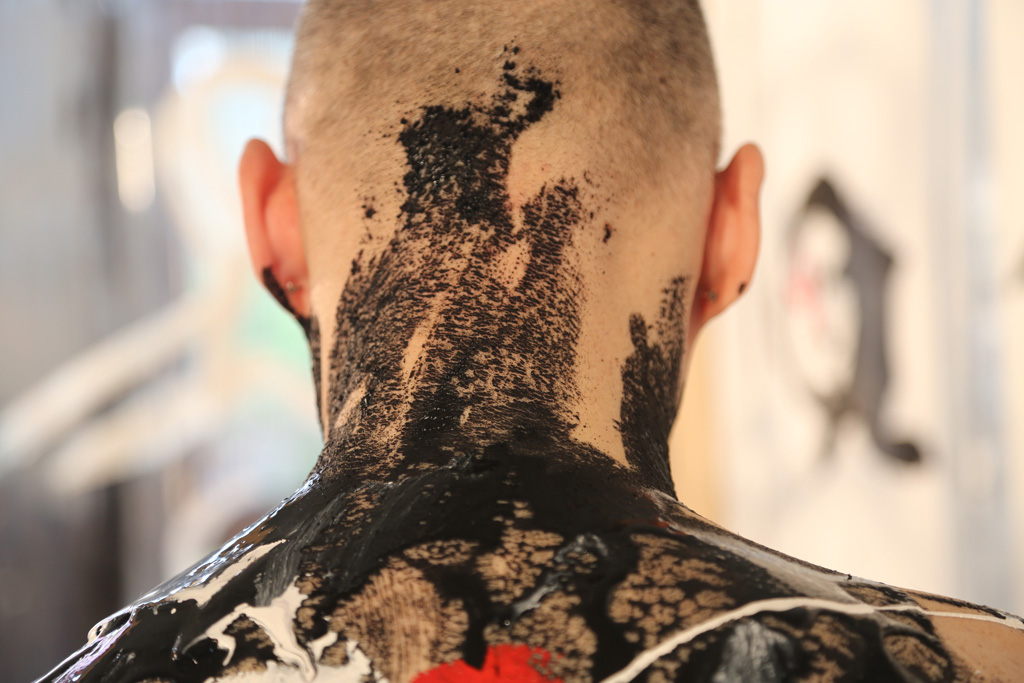 THE MEETING POINT PROJECT is an ongoing collaboration, based in Paris and New York, by four interdisciplinary artists, Jérôme Liniger (Switzerland), Katy Martin (USA), Christophe Averlan (France) and Nicolas Jacquette (France). They began working together in 2012.

Each of them brings a different background, temperament and artistic sensibility. Liniger and Martin both trained as painters, and have each pursued painting within an expanded context, one that uses live performance, photography and video. Averlan is a playwright and theater/film director. Jacquette has a background in graphics and photography.

As Liniger writes, “Nous faisons de la performance de peinture, de la peinture live.” What he means is that, together, they are exploring painting as performance – “live painting” – where painting, theater, photography and film come together to create the image.

For them, painting itself is ephemeral and intimately tied to the artist’s body – and from there, to surfaces such as plastic or canvas. Painting itself is a gesture, a trace of a movement in real space, the remains of a time and physical presence that are gone.

Even so, the camera isn’t there to just document or “capture the moment.” Rather, it finds and composes the painting. In this work, the camera is not a bystander or a neutral witness. Instead, it is fully integrated into the performance, into the act of making marks.

The performing space IS the meeting point for the four of them. It extends to other people through screenings, exhibitions or performances in front of an audience. In a space and a time where they can enter and stay, viewers are invited to enjoy the materiality of the painting action.